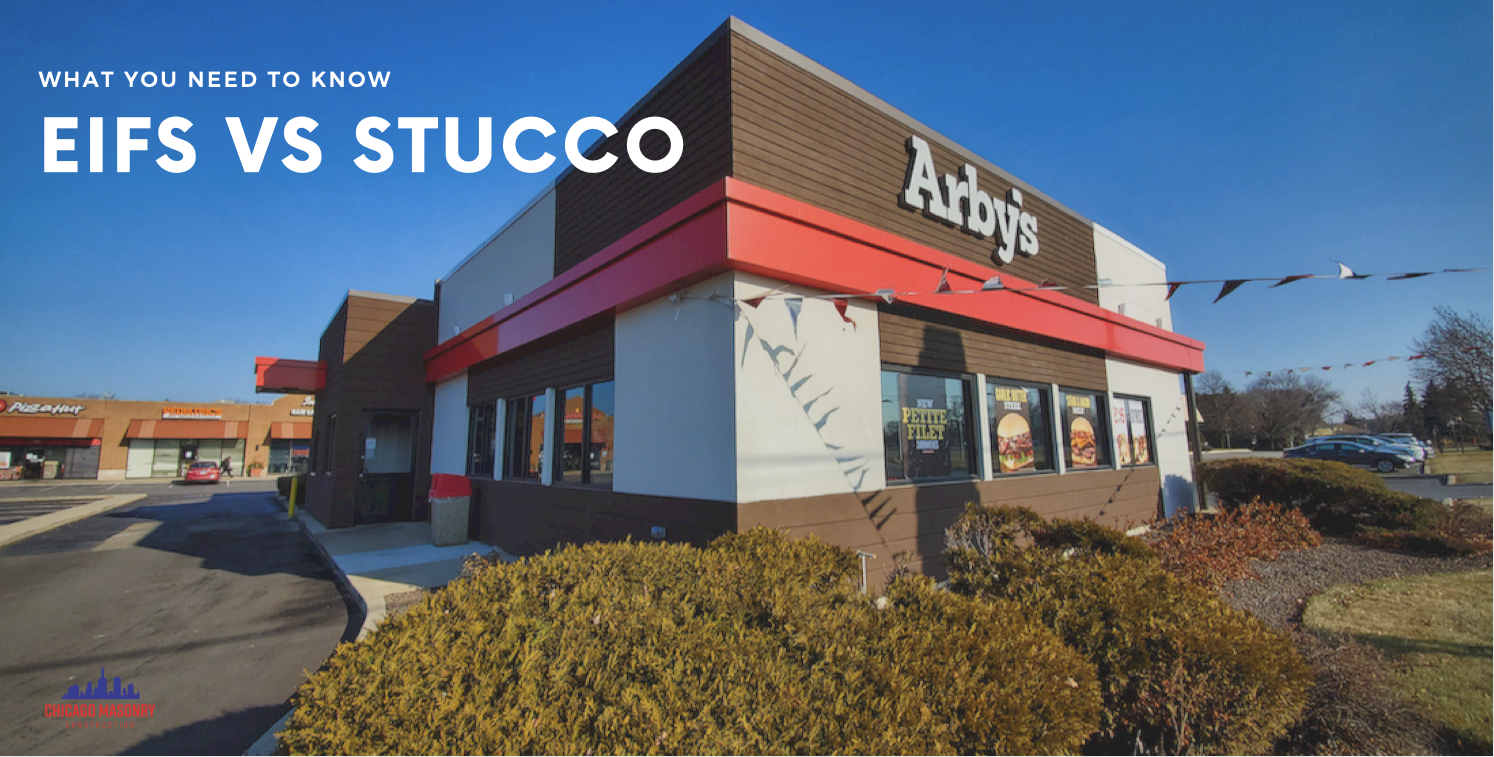 To the untrained eye, stucco and the newer synthetic alternative, Exterior Insulation and Finish System (EIFS), can appear identical. It’s the actual properties and the installation of the two that sets them apart. Here are the basics on EIFS vs. stucco.

Traditional stucco siding dates back to ancient days of the Greeks and Romans, but around the 1950s, a synthetic stucco siding began replacing stucco. EIFS today remains a popular alternative to stucco, as long as it’s applied correctly.

What’s the difference between stucco vs EIFS?

The difference between stucco and EIFS is rooted in how each one is constructed and installed. Stucco is made from Portland cement, sand, lime and water that is applied in three coats over metal lath. It’s then coated with an expansive acrylic-polymer finish to deter cracking. Much of the new cement stucco being applied today uses foam trim build-out details and acrylic finishes that look just like EIFS. EIFS is multilayered, made up of a foam insulation board, a coat of the synthetic stucco, fiberglass mesh and then a top coat. It rarely needs to be repainted it since its special acrylic coating is resistant to fading, chalking and yellowing. It is also less likely to crack than traditional stucco because of the mesh netting that reinforces the base layers.

Benefits of EIFS over stucco

For the user, one of the most notable differences between stucco and EIFS is in energy efficiency, as EIFS serves to insulate the structure. EIFS can reduce air infiltration by as much as 55% compared to standard brick or wood construction. According to the EIFS Industry Members Association, EIFS adds to the “R-value” of a home or building. (A measurement of the resistance to heat flow. The higher the R-value, the better the material’s insulating value.) Most EIFS use insulation board with an R-value of R-4 to R-5.6 per inch as the innermost layer in the wall system. When combined with standard wall cavity insulation, this extra layer can boost wall insulation from R-11 to R-16 or more.

The outer acrylic coating on EIFS also makes it more durable than stucco and resistant to fading, chalking and discoloring. The mesh netting reinforcement in the base layer makes it less likely to crack than stucco. The color is integral to the finish coat, which means that even if the surface is scratched, the same color appears beneath it.

EIFS is designed to be flexible, making them highly crack resistant. When walls expand or contract due to extreme changes in temperatures, EIFS absorb building movement without causing the unsightly cracking problems that are so common with stucco, concrete and brick exteriors.

EIFS come in virtually limitless colors and a wide variety of textures, and it is easy for the installer to create accent pieces on a structure like arches and cornerstones.

While commercial storefronts will typically feature either cladding system, EIFS until today can be hard to get approved in the city of Chicago (other than as design accents).

This is because in the 90s when EIFS was introduced to the masonry industry, there were no designed waterproofing systems, industry standards or testing requirements in place. As soon as applicators finished applying it, water could seep into the interior of the application and destroy it. Many municipalities, including the City of Chicago, saw commercial structures with EIFS start to fall apart after only a few years and as such made it very hard to use within code in the city.

Stucco is a full masonry system that is screwed to the wall over a weather resistant barrier, so water doesn’t ruin the exterior structure for a long time, even if it does get behind it. But here’s the catch: EIFS installed correctly is just as good as stucco, and the labor is more cost effective.

Today, standard waterproofing systems behind EIFS ensures that this material is a reasonable option that many businesses continue to use for residential and commercial use. However, until today, we at Chicago Masonry typically only work with EIFS in the Chicago suburbs due to constraints in the City of Chicago building code rules.

Applying EIFS that is waterproof

At Chicago Masonry, we prefer EIFS because although the material may cost more, the labor is less time consuming. This ensures the commercial masonry project can be completed quickly and on schedule.

It’s crucial, though, that the applicators adhere to the manufacturer’s installation process on the EIFS. EIFS that is installed incorrectly can be subject to water intrusion in the wall cavity, causing deterioration and even mold. The applicators begin by waterproofing the substrate the builder has installed on the outside of the structure. This process includes correctly taping and sealing the joints of the substrate prior to waterproofing.

Step 1: The first step is treating the joints and taping the seams of the substrate.

Step 2: Waterproof the substrate. This can be done with sprayers or a roll-on application.

Step 3: Adhere the insulation. In this step, it’s crucial that the applicators trowel the adhesive with a notch trowel using vertical lines. This allows for water to flow down vertical channels. Applying the adhesive in any other method during the application can later allow water to become trapped and cause cracks in cold weather or even spalling of the insulation can occur. This compromises the integrity of the EIFS system.

Like many other trades, it is what is unseen that is the most important aspect of construction. Once foam board goes up and is adhered to wall, no one knows what’s behind the EIFS until it’s too late. That’s why it’s essential to work with applicators you can trust.

Click here to view our portfolio of recent commercial EIFS work in the Chicagoland area.

EIFS vs. Stucco: Here’s what you need to know